Amsterdam: one year on 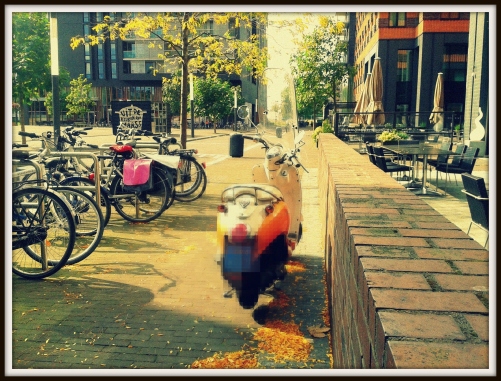 So I have been living in Amsterdam for a full year. It is long enough for me to get over some culture shocks like this one: Somebody told me that the grilled spicy chicken drumstick (that I was eating) looked disgusting so they rather stuck  to the usual boterhammen (two slices of bread, one slice of ham, one slice of yellow cheese) as they had yesterday and the day before that and so on…

The Dutch are normally quite short (verbally). While the English northerners that I know would use five extra words and three ah, uhm, well to hint that they are not crazily in love with something you offer them, the Dutch just don’t.

And they love sandwiches. Full stop. When I told a friend of mine, who is teaching me Dutch, that I don’t like eating bread, her reaction was like: “ But you are learning Dutch, you should like bread”. With what I learn in the last year, it actually makes sense.

I still do not like eating bread, but I started to get a grip on the language. I began to understand gossips around lunch table, or held a short conversation using only one or two English words here and there. Others still laugh at me speaking Dutch with my English accent, but I passed caring. Maybe it is time for them to get over it too because my accent is adorable, even without some surprising British-like sounds 😀

I joined the not-a-tourist club when I bought my own bike. I felt in love with cycling in Amsterdam straight away: the sense of freedom, the amazing view over canals, the breeze touching my sweaty back. I stubbornly cycled to work most days regardless that it was dark, cold and rainy more often than not. I dinged mindless tourists loudly when they wandered into my bike lane. I feel like I belong.

This entry was posted in Live. Explore. Learn. and tagged Amsterdam, life. Bookmark the permalink.