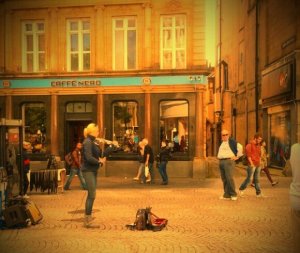 I saw her the first time when I was wandering around Sheffield’s Heart of the City area. She wore jeans and jumper playing outside Nero among passers-by and chuggers. She was out of the ordinary somehow. I could not tell which part of her beauty struck me: her distinctive Western European features or the way she drew the bow with elegancy. I was charmed. I stopped my wander, got myself a cup of tea in the nearby shop to listen, to see, and to absorb her. I left without talking to her. I like keeping certain things un-known and un-touch while I am on the move through towns. They make the journeys mysteriously unfulfilled. They give me a reason to go back one day.

Unexpectedly, I saw her again only a few days later in the familiar street of my so-called English hometown Newcastle. She was in a glamorous dress shining in a windy morning. Her music warmed up the chill air of the early hours in the northern town. I stopped this time to talk to her. She sounds friendly. She said she travels around the country to perform. Another traveler. She said she plays in weddings. In my fantasy, I already saw her playing the white violin in my white wedding ceremony. She said I am not the only one who saw her in different places. She is not the only one whom I tried to leave behind in my wander. Fate crosses our paths once more time briefly but pleasantly. Life is full of nice surprises. 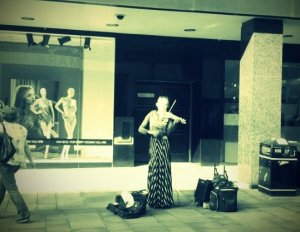 This entry was posted in Europe. Bookmark the permalink.

9 responses to “The Fiddler”