Bristol with THE smart phone

I am not one of those who claim not being able to live without the smart phone. I do have one that is proved to be quite handy when I have to travel far for work. Yet I reckon I could do absolutely fine without it. Get some maps, buy some paperbacks, and stop worrying about work emails when away for work. Problems solved!

Surprisingly, I am glad that I have the smart phone in Bristol. Not for finding places. Still I like using traditional maps, being lost and caught by some sympathetic locals who kindly give me directions. Also, it is thrilling finding myself somewhere off the planned routes, discovering some hidden beauties and instinctively moving forward. I call it the art of being lost.

Back in Bristol, I used the phone to CHECK IN Foursquare when I stopped at certain sites along the Harbourside Trail. At each check-in site, I found a link to an audio story set in that very place I was standing. Technology is pretty impressive, isn’t it?

One of the stories is about of John Cabot the Italian explorer who sailed from Bristol and landed in North America under the commission of the King of England. I was standing in between his west-staring statue and the replica of his “little ship” called Matthew of Bristol  when the story teller had a rant about the statue in a supposedly Italian accent of Giovanni Caboto (i.e.John Cabot). The statue was erected facing the direction of Mexico, the land of the good spices and coffee as a bitter reminder for “his failure” to over come the North America obstacle. The statue was the symbol of how his achievements were under evaluated compared with ones of Great Columbus. He didn’t seemed to appreciate the honour of having such an impressive architectural shopping centre (i.e.Cabot Circus) named after. He sniffed at the trading link of the naming decision. In Bristol defence, I would be honoured having such a piece of art named after me. 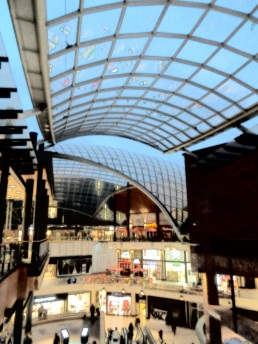 Somehow the story made me laugh out loud. I did really enjoyed companionship from the voice there and then. After all, those stories made me feel much closer to Bristol Harbourside. I went beyond the beautiful views to understand the sailors, the ships, the industry and the people of the land. I felt hopelessly in love with the Harbourside. I thought i could have lived in one of the buildings over look the river and be a part of the stories. It is not that i am cheating on my beloved Newcastle, it is that love doesn’t give reasons.

Where I die to have a flat in

I think the Harbourside Trail (Note: Its official name is Jubilee trail but don’t let me start on it) is a very smart idea to bring people closer to the land they travel without bias views of one particular guide. Its the art of exploring with the excellent help of technology I have to admit.